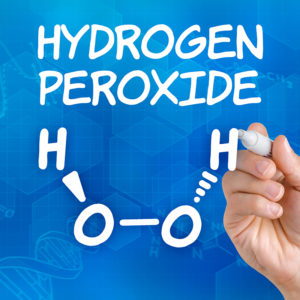 As water treatment professionals, we sometimes stumble upon jobs that are very troublesome. Those jobs almost always involve iron removal from ground water with oxidation. Oxidation is a tricky science. Your pH must be near neutral, but never above 8.2. High pH will cause the iron to create sludge. If you are using conventional air injection via venturi, pump or vacuum, you run the possibility of creating iron precipitate sludge. Also, barometric pressure, water temperature, and elevation greatly affect water’s ability to hold oxygen.

Peroxide to the Rescue:

Now back to that pesky job leaking 0.5 ppm iron past your air fed iron filter where you’ve tried “everything”. Peroxide to the rescue! What you are lacking is a good wallop of pure O2. 7% peroxide contains 70,000 ppm of oxygen. That will jump start your oxidation! Try it! You will be amazed. Your filter starts working and will nail that last bit of sneaky iron or sulfur.  Peroxide works wonders for sulfur too.

For the wholesale market, we have built a complete package to treat water with iron and/or sulfur problems. It is called the Ultimate Oxidizer.

Extra Details You Need to Know:

Now I can continue with a real snoozer of a post with all the minute details of “peroxification”, but there are important peroxide application rules of the road:

Please email me at michael@urbansaqua.com or call 610-365-7818 and ask for Michael Urbans.